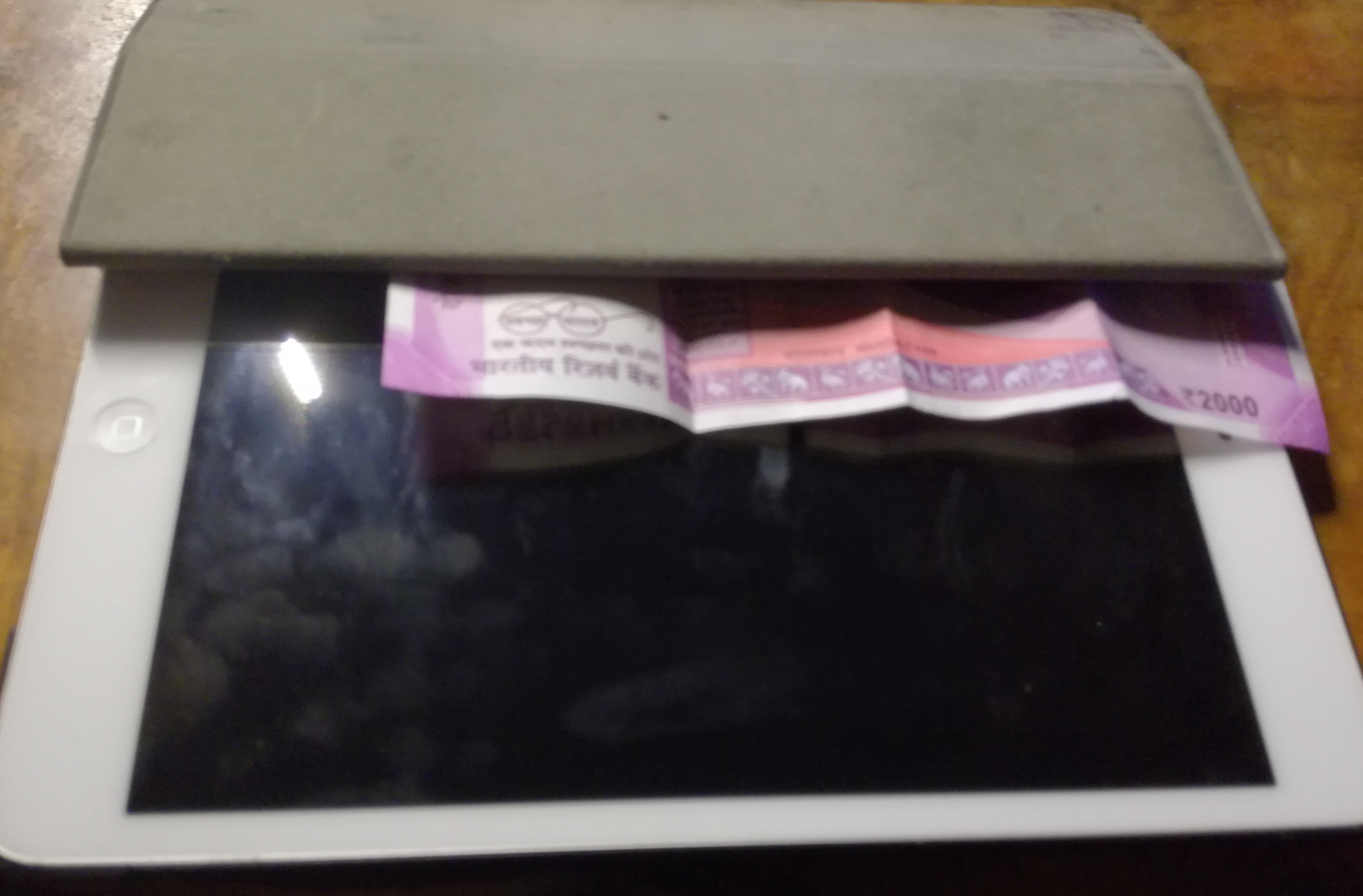 When I started writing this blog, I would not have imagined that this would be such a bad decision. For a day, thanks to my imbecile friends on Facebook, I actually got interested in the idea. Read a bit and had my apprehensions.

Announced on the 8th of November, 2016, it’s been a week of complete chaos across the country. A calamity so sudden and suicidal, that all commercial economic activity has ceased. It has hit across supply chains. Farmers are lined up in long queues in front of banks instead of preparing themselves for the sowing season.

Lack of enough criticism scares me and my little pot of Investments in Indian equity. I did my own research using this app called Bushlark, which allows me to ask location specific questions. Quite useful in finding an ATM or asking other crucial questions during these uncertain times. My own research confirmed by sensible opposition parties like the AAP.

The new notes look nice. I bought my laptop in Europe and don’t have the Rupee symbol yet on my keyboard. The new 500 rs note looks a lot like 5 € but is actually worth around 7€. The 2000 rs note which would be the highest currency denomination worth around 27 €, and could pass off as the 20 € bill, though it has a distinct pink color to it.

The new notes are yet to be well distributed across the country. As long as we are constrained with a fixed number of printing machines, limited ATM centers, and limited banks the task is going to be very arduous. The lack of thought on such crucial issues is baffling. Why will the government risk losing economic growth? Are we in such grave despair? Have our corporates looted us so much that this had to be done?

Explaining Demonetization to a 10 year old

What does all of this mean? India is cleaning up its currency in circulation. Getting rid of hoarded black money ideally should make the white money worth more. Its effects can be seen in the real- estate market, which is usually inflated with corrupt money.

Housing stocks plunged after the news. But recent income tax reports claim that only 6% of the black money recovered in 2015/2016 was in the form of currency and ornaments.

Ideally, the general belief is that there is too much of old money flowing around and by regulating money efficiently with new notes, you would crack down on counterfeit currency. Now, this sounds great and theoretically seems like a simple solution to a big problem.

But the need to do something so drastic when better preparations could have been done is worrisome. A big gamble, difficult to comprehend and thus difficult to criticize. Initially, you could deposit all your cash and withdraw only 4000 rs, after some feedback they raised it to 4500 rs, after a week it is down to 2000 rs now. An indication that there is not enough cash printed as of yet.

While most people have optimistic opinions on social media and TV, I dreaded the ground situation I would have to face in India currently. Yes, I hate lines.

The uncertainty caused by the decision is from a “If they don’t have bread to eat, let them have cakes” perspective. Forcing all the informed people to take quick and prompt action and then help spread awareness about the new age of payments among a population that relies entirely on a minimum amount of rainfall a year to survive is a mammoth task that requires much more planning.

Million ways Demonetization could have been better

The inconvenience and uncertainty caused by demonetisation was strangely underplayed by the media. Some pockets are speaking out now. This blog itself was written initially in week 1 and is being updated as days pass by.

With people swarming banks in despair, ordinary Indian lives, already left to so much uncertainty faces one more shuffle which could definitely have been handled in a more graceful manner.

Was secrecy so important that, the new notes could not have been already transmitted in circulation to such quantities that the demonetization of these currencies would not cause enough discomfort to the average Indian who hardly finds time off to spend at banks.

Demonetization: Big bang reforms need to take everyone along

By the average Indian, I refer to the old man who lives 50 km away from the nearest bank, who is stashed up for a dry day, but ignorance makes him trust unscrupulous agents returning 4 X 100 rs for a 500 and 8 X 100 rs for a 1000. The losses among the weak or those slow to adapt is direct and severe.

Hoping that somehow, a big part of the black money stash or just Indian savings are now deposited in banks, the account books are all cleaned up and banks are able to lend more. But a move like this affecting the masses suddenly in such a manner, leading to loss in wealth among the masses who are suddenly being forced to make massive transactions compromising on over 20% losses, will directly affect the economy.

With over 80% of cash flow in circulation called back, liquidity will remain in shortage for a substantial time. With corporate losses and selling in stocks that is expected apart from a drop in real estate prices, the only winners are those with assets abroad, until massive inflows are made to take advantage of the inflation to start again with new bank lending from all the deposits.

So basically the plan is “burn a good percentage of existing money”, causing deflation. Experts predict a decline in all asset prices, but presently the stocks are down while gold prices are booming for now. The dynamics are crazy.

I have been thinking about a few scenarios of what can go wrong with demonetisation as I was successfully able to predict the mess that is happening currently.

I am no expert, but if it would just take me an extra meeting with the team to think of an idea of injecting some usable currency in the system prior to this, the uninformed masses would not be interrupted all across the country, so as to lead to sudden stop in economic activity.

As an Investor, I hate uncertainty. As an Indian, I am always prepared for it. Better planning for such an important decision is required.

Indian currency demonetization definitely seems like a Harakiri before Japan visit. A desperate step for a desperate time or a self goal?

In any case, now that the shit has hit the fan already, I am trying to put my thoughts together to understand the consequences. Deciding to ignore the Facebook experts on my friend list, lets dig in like a 10 year old.

Work for the government, you are lucky! Private companies depending on the source of revenues. How do the numbers come out in annual reports? Maybe, extra accountability should ensure higher figures, but a shortage of liquidity will lead to a stand still in consumption that will rise only out of confidence. Presently, the upper class will take it easy on spending. Shopping will be done more online. Spending will be discouraged in the society.

Every one should be hurt presently, especially those invested with real estates receiving rent in black. The black market exists to fill a void, demonetizing has led them to barter presently. The optimal flow of money has been affected and presently, I wouldn’t be surprised to see virtual currencies, often in terms of debt with individuals promising to pay at a later date far from this uncertainty.

If you are educated and have a job based on dealing with the international economy, you will be hedging yourself from the earning downturn in the domestic market.

It may be a good idea to invest in stocks post demonetization, considering that more money will be accounted now. The correction in the markets can be a perfect opportunity to enter long.

Maybe, I would never want to be a student in a school with Modi as the Principal. Some one who would wake all the students up at 4 AM in the morning without informing them the day earlier, to only take them on a long morning hike in the cold. Asking them to keep running faster, to burn more energy and release heat.

Promising them of great dinner later, but in more quantities to those who finish the race first. I probably already went for a run the previous day all by myself, but am being dragged along against my will as I have to eat anyway.

To make it worse, I saw some other kids sleeping early that evening almost as if they knew about the surprise running trip in the middle of the night that promises to be in the long term best interests of me and my family.

Shit is hitting the fan,

“I have a new 2000 Rs. note. But it is useless as no one is ready to accept it for two reasons. One, they do not know how the new note looks like as no body has seen it. Two, If I buy stuff worth 500 rupees no one can return 1500 as no body has any change. The city has come to a standstill,”  said one person on the Hindu today.

Looks like India will be functioning only with 100 rupee notes and digital transactions. Maybe they should have just banned the 1000s.

“If the people dont have bread, let them have cake” said my friend and former Indian colleague from Bocconi. I pointed it out to him on facebook and he decided to ignore me. The Bhakti is strong in that one.

Rural India continues to suffer as our Indian elite ignores their pleas.  Not all the voices are mute, and sense is creeping in through the fog of indifference. In India you can always find someone to say something awkward in the wrong situation. With the currency exchange news, you have some of the most shameless people in India currently linking this to a patriotic duty. The army had its say in it, denying that they go to war on an empty stomach.

When things get so bad, that our supreme leader in an act from Politics 101, has his old mother stand in line at a bank along with the masses. I was in no way interested in seeing this as it was clearly a photo gimmick aimed at only soothing the anger of our masses.  Even Rahul Gandhi was at his coolest best when he said that he was not like Modi and would not comment about his mother.

Not really wanting to be anti Modi, but the guy leaves me with no choice. Its always a gimmick, a show, a spectacle. Lacking in depth, Modi could use an advisor like Kejriwal. Actually, if Modi just started listening to Kejriwal more, we would not be seeing this day today.

Demonetization of money exchange in India is a desperate step for a desperate time. To blame previous governments and the global economic outlook for this is in poor taste.

Creating obstacles to development when it comes to being a pain in the a$$ for the AAP gave the game away in my eyes.

Entrepreneur 5 P.M. to 9 A.M.: Launching a Profitable Start-Up without Quitting Your Job

EMERGENCY APP RECCOMMENDATION: DOWNLOAD NOW to find an ATM with CASH near you

Mindfulness: A practical guide to finding peace in a frantic world