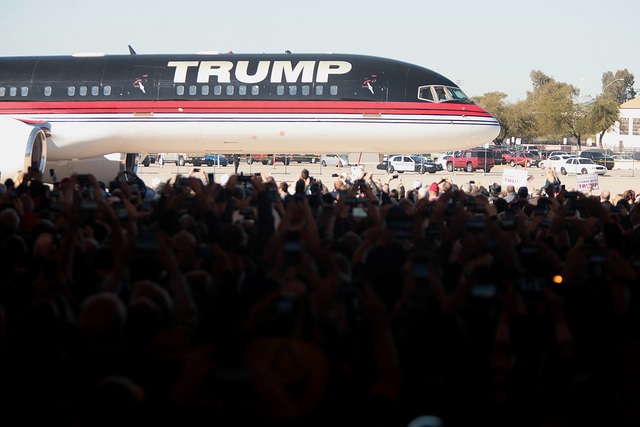 I still remember the day watching a major Indian business news channel, when a successful stock Investor was laughing away at the possibilities of having a Trump win. Here was a person who people listened to with attention for valuable investment tips, while I kept thinking that this investor’s political prediction may go horrible wrong. Political risk is not an unfamiliar word to a former Investment Consulting analyst.

Have to say, I was not expecting a Trump win at all till the day it became a Clinton vs Trump. Once Bernie was out of the picture, it could still have been revived with a nicer woman who was not related to a former president.

In-spite of all the favorable conditions for a Trump win, I was skeptical. I was already informed of the high possibilities by my cousin in the United States and an other friend in Hyderabad who likes to dig deep into issues. Still had the feeling that Clinton would barely manage a win.

Vote someone you trust, not some one you fear

Personally, I was rooting for Gary Johnson and really hoping that he would make enough votes to get noticed for the next time. Unfortunately, the third parties could not make a major impact again. They would be ignored by the major debates and left to appeal only to a small percentage of informed Americans without vested interests for a better America.

I have never even visited the United States. But I grew up watching Hollywood films, Nickelodeon and Cartoon Network in American English before it got dubbed in Hindi and local Indian languages. So there goes my expertise on anything I write here. But I have been living in Milan, Italy for over 6 years and do meet a few Americans often apart from working in American multinational companies like Western Union and Mercer.

The situation presently in the United States post Trump executive orders has a familiar smell with a tinge of Deja vu. The United States is fortunately a great country with checks and balances to protect civil liberties. The people have adequate implementation of the law to protect them unlike in some other countries which elect an erratic leader.

Soical media and the Internet has really helped boost the general sense of civil liberties by letting us complain and lament about any injustice easily. On the other hand, we loose a little of our privacy for the common good. No way you can have many friends and a strong network on facebook using fake pictures or boring posts.

Adding a genuine personal touch to your facebook posts works wonder is what I would say from over 10 years of social media activity across geographies. You could be a really smart person, but if you are not active enough on social media, you would not garner the same amount of attention and likes.

So like how in Social Media, you need to surprise your friend list with something really cool and awesome every often to garner more attention, our Politicians too come from the same school of thought. They will keep surprising us as long as we react to it all insane on Social Media. I wouldn’t be surprised if politicians are not already cashing in widely on you tube videos.

Trump and Modi are playing the same games of being the social media King. That viewer ship on an article with their names on it is all they need to take things ahead. Just like how you value Facebook by the number of users, our politicians are busy brand building, having their names backlinked around the Internet across the world.

Good or bad publicity is just a matter of percentages. Start with bad publicity which gets the ball rolling really quick. You then smother it with some boring old good stuff later.

By the boring old good stuff, I refer to Obama’s farewell speech. I am sure it was awesome to hear, but it still does not have me curious enough. If Obama wants attention, he should rise up again challenging Trump when he takes things too far. Just like how Manmohan Singh dropped his clear cut opinion on India’s Demonetization.

Need for a Bellerophon, the cure for the Chimera

Remembering Tom Cruise’s Mission Impossible 2 where I learned a little Greek mythology, from the Dr. Nekhorvich when he said:

“Well, Dimitri, every search for a hero must begin with something every hero needs, a villain. So in a search for our hero, Bellerophon, we have created a more effective monster: Chimera” [1]

But as an informed Indian, I can guarantee you that if there is anyone who can take on Modi, it is Arvind Kejriwal. Our Indian Bellerophon, who has a long list of extraordinary achievements in his brief political tenure.. A rare gem that the Americans need to search amongst themselves if they want a real opposition to Trump.

Who will rise up to this challenge to be the American Arvind Kejriwal/ Bellerophon?

Clear the confusion on propaganda analogies

Some people on the internet think it is appropriate to compare Trump with Arvind Kejriwal. I think of Trump to be a smart guy like Modi who does not hesitate to learn from an opposition he detests. They are less spontaneous stage performers than they are diligent planners. While facing multiple fronts, the best strategy often is to create a distraction. You can then buy time and space to write down the script for your term.

Under heavy pressure to act, both leaders will be forced to act on the lofty campaign promises. If you appeal to the wrong vote base, you empower them by your silence. They are a force you would like to keep entertained.  So the world basically goes Mad Max.

To pass a bill that causes them minimum discomfort but causes millions a lot of discomfort is what they will be respected for. The feeling that justice is served when every one including the culprit gets punished is primitive. It appeals to only the ego and nothing else.

Unfortunately such ego is only for the privileged. Those with money to invest post demonetization stock prices. Or in Americas case, those buddies of Trump who are invested in the other Gulf countries, fortunate to be spared from a spat with the Donald.

Trump and Modi are like Sales men. A nice educated family person like Obama or a shy brilliant old Manmohan Singh could do a great sales job. They would succeed with their expertise, but imagine meeting loads of people under unmanageable circumstances. To deal with such high number of people with various self interests, you can barely afford to be a smiling Obama trying to please everyone.

I mean, to figuratively sell anything like crazy, you got to loose self respect. You would have to maneuver your actions across a broad bandwidth. This would let you be more agile to act quick and grab opportunities. To exercise your muscles to exhibit power widely helps to establish your authority.

That is how it seems, until the economic results come in.  Living in a country run by a pure business man does not provide you with many exit options. It is not like working in a corporate.

Maybe lot more Americans will be leaving the United States to see the world. Post a strong US dollar with rate hikes, its a sin not to travel. Modi surely agrees with me on that one.

Failed Machiavellian: Cannot balance the Stick and the Carrots

To be a good Machiavelli you need to learn to balance the stick and the carrots very well. If the economy disappoints, then Trump will be no longer dancing to his own tunes. He might instead do the real erratic mistake that the American population need to watch out for.

Indian demonetization was a quickly prepped up idea. Will Trump also succumb to some future economic problems and cook up something similarly quick for the American People?

As a former Sales executive myself, I see such an attitude by Trump with empathy and doubt. I can see where he is coming from, and that is exactly what is disturbing me.

Trump has approval because he wants to have better relations with Russia and help establish peace in the Middle East. This could translate to short term solutions instead of long term commitments. He has a reputation to be an agile business man. Hence, he may find himself negotiating with tougher informed delegates. The only good deal is where we both leave feeling better.

Currently, the trend is to push you down and then give you a hand to make you feel better. Whatever works for those who wish to control the masses. Implemented differently, but the techniques have the same underlying principles across nations.