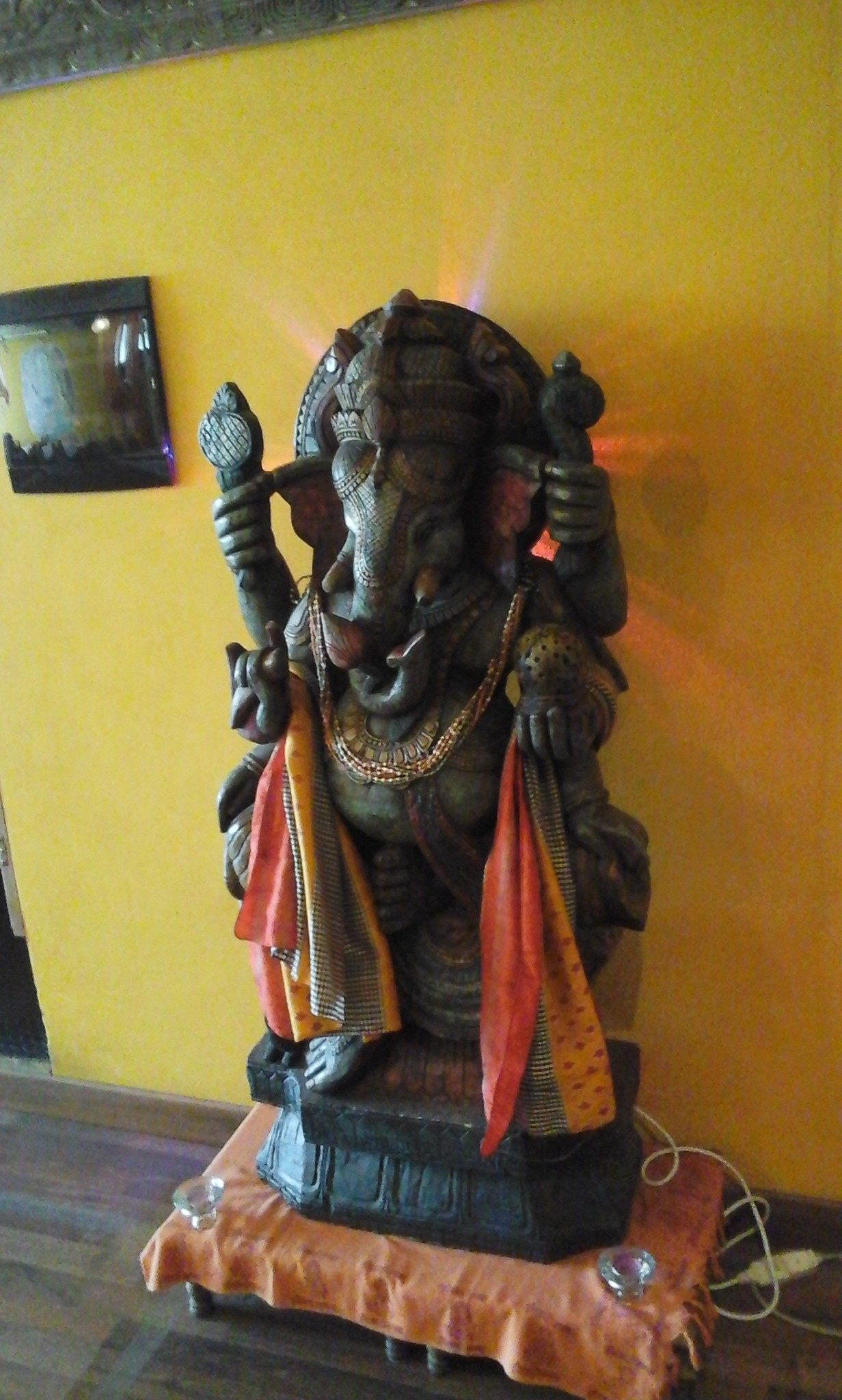 Religion is at the foundation of economic growth. When people talk about religion, all I think in my head is “Show me the money” . Understanding what makes religion sustainable for so many years may help us to ensure it’s future relevance.

In today’s confused world, all the best brains are too busy making and spending money to spread the wisdom around. Thinking about the economics of religion has created a new found respect for something that I never really understood before. As a former engineer, I come from a rational school of thought.

I was looking at a Facebook post of an old black and white picture of an Indian family happily posing with their two cows. The tag describing how Indians treat cows like family is innocently cute, but the economics behind the value of that cow, depicts an interesting picture about how religious and cultural practices come to exist and why being a good Hindu could have traditionally led to increase in family wealth in a typical monsoon dependent arid Indian village.

It’s almost like the religion of a region principally depends on the best strategy to thrive and prosper. A milk giving cow is a highly valued asset, that gives you inflation hedged cash flow in form of milk sale or it can also allow you to meet the minimum dietary requirements of your family.

Religion, Culture and the Economics

Just like how the Christmas markets in Europe bring in the best farm fresh products to city centers, India tries to take advantage of it’s diversity, with businesses trying to market every festival under the sun.

The modern Indian baking industry loves Birthdays, Christmas and New Years, while the traditional Indian sweet shops love all our gods. Diwali is our superstar festival. The level of massive consumer spending during Diwali ensures numerous seasonal jobs and benefits.

It’s almost like our festivals are happily celebrated to boost demand during agriculture surplus. Sweets do have longer shelf life and qualify as a value added processed agricultural product. Coco Cola has sold the idea of getting a carbonated drink with lunch. Mean while, some of our Indian ancestors have sold the idea of increasing consumption of sweets during the festivals.

Diwali is the favorite festival for businesses in India

Not just sweets, even guests and gifts would keep pouring in during Diwali, with the gifts often getting redistributed such that it reaches almost everyone’s hands.

The economic buzz during Diwali is so much that some entrepreneurs massively exploit the import of cheaper Chinese firecrackers, making a quick buck every season. The leftover inventory could also be sold in New Years which always comes around 2 months after Diwali.

Festival sale allows setting up temporary businesses that can ride the increase in demand, and return the next year. These day’s many festivals qualify as marketing events, where opportunistic corporate executives like myself are found promoting our business.

Religion ensures simple luxuries for everyone

Consider the Coconut consumption and distribution in Hindu temples in India. Hinduism does keep the domestic coconut demand high.  It also enables direct consumption in its natural form by scores of local devotees. I have paid a much higher price for fresh coconut in Milan. Hence, I can see how religion can boost local demand and distribute consumption of our under rated luxuries among the masses.

Considering that our Indian rich could have exploited our coconut production for huge profits in exports (maybe they will once they figure out the best way to export fresh coconuts), I am immensely pleased that religion serves the Indian masses by at least ensuring them coconut, dry fruits and sweets etc on visits to a temple.

Its quite similar across all religions. While the Church in Italy does a lot in helping the needy across the world, Muslims often give out alms to the poor. I am actually most impressed by the Sikhs, who really seem to have a strong sense of social service.

Religion, a framework for life

The concept of religion for me seems like merely a framework to live your life. Which would consequently ensure security and prosperity to the inhabitants of a region. A framework that often got challenged if it did not adapt with time. The need to adapt to the available local resources, trading partners, internal and external powers, and also the Industrial Revolutions seems to secure a religion’s existence for tomorrow.

If religion was a website under development, it’s future sustainability would depend on its ability to adapt to the latest technologies. Always prepared to imbibe the best practices. Adding unnecessary constraints would work great as a choice but not as an obligation for a framework that seeks to innovate and adapt.

Back in the day, before we had our Industrial Revolutions, lets go back to pre 1784. A more brutal time for the free thinking intellectual and a much better time for an unscrupulous strong man. When intellect could not effectively leverage on the existing technology to be better than the strongest well built compliant worker.

Religion was important to ensure sanity. Very essential to save a life from being treated like a mere machine. Without technology, the only way a human life could be valued “worth keeping alive” is with faith.

A time, where religion could have made more sense for everyone. As it explained complex sustainable group dynamics in the form of  simple instructions. The common man would not fall prey to the selfish motives in a Prisoner’s dilemma and would work for the common good as a community. You don’t have to teach Game Theory to him, when you can bring the fear and awe of God.

When religion was the biggest source of consumer demand that would ensure optimal transfer of wealth. No other story could sell better as even wars have exploited religion. Building a massive statue actually made sense back then as there was literally nothing better you could do a ruler.

A massive structure or a statue with a story is the best propaganda ever before newsprint and the Internet arrived. Foreign powers fascinated by a city’s richness would be more eager to trade.

I am sure the Taj Mahal in India, built by the Mughal Emperor Shah Jahan,  impressed a lot of visitors since long. Even the current American President Donald Trump has a huge luxury casino named the Taj Mahal.

Q1: What if those poor workers who built the Taj Mahal were not amputated ?

Back in the day, when work commitments were long and dependent entirely on your craftsmanship and experience, these workers could build an other Taj Mahal or something of that stature.

But Shah Jahan would not survive till then. He had absolutely no use of these people anymore. They could not deliver any more value in the near future. The experience they had gained was very precious and could be of great help to the next biggest bidder.

A time when human hands were the most efficient machines and religion the best framework to coordinate these individuals. What if the Taj was built a few hundred years later?  The availability of steam and better equipment should have led to lesser efforts.

Q2: Would Donald Trump have named his casino different if the Taj was built later?

Shah Jahan could have hesitated crippling those builders. He would probably not value the Taj so much due to lesser effort involved in building it. With technology, men would not look at other men as mere tools that come with just a cost of keeping barely alive. The Taj Mahal would be one of many other grand structures. Trump may not value the Taj the same.

Sure seems like it. Religion is powerful. With great powers come great responsibilities.

Back in the day, Religion may have saved those workers from not loosing anything more than their hands. Shah Jahan, typical brat Emperor was more selfish than his grand father, Akbar.

People change, but core ideas have remained in religion to ensure sanity among the spoilt brats.

Religion may have been the best reason for some one to pay for this cost, but science & technology today not only boosts production, but it ensures prosperity that has pushed the masses up the Maslow’s Pyramid.

Human life has never been more precious. No longer valued for just its physical limits, but also its intellectual potential.

Technology taking over the job of religion

Just a supposition, but with time and rise in technology, life should be getting more civilized. The decency level in society should ideally increase. Even today, social media helps us “Shout” louder for help or any injustice. This decency is not confined to any single religion. Every community just needs more time to adapt and trust technology.

While automation slowly takes over our jobs, religion no longer serves as the social, ethical marketing scheme it started out to be. Religion has always been useful to coordinate the masses.

When religion doesn’t serve these interests effectively, it becomes less desirable among the sensible. And thats when the loonies come and take over the monopoly as God’s brokers.

My forefathers have reformed themselves and their beliefs for a better tomorrow. Even today, religious practices need to be seen from an aspect of rationalism, like it has always been seen.

Promoting seasonal festival markets like the Christmas markets in Europe can take care of a lot of unemployment problems. Organizing a dedicated open place that can ensure cleanliness, safety and a family environment would ensure high value to both the vendors and the customers.

The key is to rise up the value chain with festive celebration and commerce. Religion can also hedge the growth of genetically modified food in India (GMO), by promoting organic farming and sales.

Maybe religion needs to enter a new market in staying relevant and useful in today’s age. Sticking to it’s moral code of conduct that has evolved with generations of input will ensure sustainability.

A brief look at the Industrial Revolutions, may help us make more sense of the direction we may have to adapt to with our religious beliefs.

While the First Industrial revolution may have lead, to increased number of people leaving rural villages and moving to the cities in England, causing a break down in the community that surrounded the village church, religion evolved with a growth in church movements such as the Methodists, where “thrift, hard work and sobriety” was promoted by the leading members [2].

In today’s India, we are engulfed with innovative technology and also the distractions of foreign cultures. Unfortunately, foreign culture has a few people worried for the wrong reasons. Futile it is to reverse the trend and fight the current.

History teaches us that you cant stop a better idea when it’s time has come.

Instead of looking back, religion needs to look forward to see how it can remain relevant in tomorrow’s multicultural society. How it can appeal to more stake holders to solve problems of a community instead of becoming a burden.

Milankaraja knows the best. Bushlark could be the ultimate travel app.